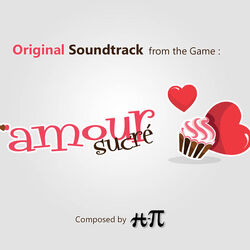 On June 19th, 2015, background music and various sound effects were implemented as a permanent feature in-game to coincide with International Music Day.[1]

All songs were written, composed, performed, mixed & mastered by French composer Henri-Pierre Pellegrin, under the username H-Pi (H-π) who also composed the music of another Beemov's game, Eldarya.

The vocals on the track My Candy Love were performed by KC C., however only the off-vocal version is played in-game. It is the only track with vocals on the entire album.

Baby, you're my lover, and we'll never
Ever apart 'cause I know
You care
To be there
Together
Oh I'll never ever be apart
Cause you're my boyfriend, you're my heart

Oh baby, I wanna kiss you, and never leave you

Put my hand out on your arm and feel secure, protected

We will never be appart

I don’t wanna be alone

I don’t want it anynore

Now kiss my lips, my  heart, my soul

Giving me all your candy love

Give me all your candy love

The entire soundtrack is available for free on H-π's SoundCloud, as well as purchasable in high quality on his BandCamp.

Retrieved from "https://mycandylove.fandom.com/wiki/Music?oldid=51709"
Community content is available under CC-BY-SA unless otherwise noted.